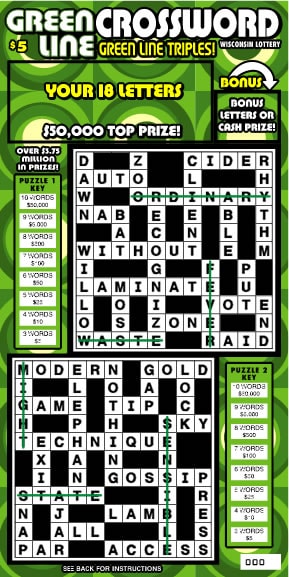 There are two Crossword PUZZLES and a BONUS box in the GREEN LINE CROSSWORD game. Scratch YOUR 18 LETTERS box to reveal your 18 letters. Scratch the BONUS box to reveal 2 additional letters or a prize amount. If a prize amount is revealed in the BONUS box, win that prize instantly! In each PUZZLE, scratch only the letters that match those in the YOUR 18 LETTERS box and the two letters in the BONUS box, if no prize amount was revealed. In each PUZZLE, if you uncover 3 or more complete WORDS, win prize shown in the PUZZLE KEY for that same PUZZLE. If you win in a PUZZLE and any one of the completely uncovered WORDS has a green line printed through the entire word, win TRIPLE the prize indicated in the corresponding PUZZLE KEY. Each PUZZLE is played separately. Only the highest prize won paid per PUZZLE.